What is the purpose of education?

"Intuition is nothing more than recognition." Herbert Simon

The purpose of education means different things to different people. According to Steven Pinker, the purpose of education is "to make up for the shortcomings in our instinctive ways of thinking about the physical and social world."1 The most effective method of understanding how the world works and correcting our faulty intuitions is the scientific method.2 An education without teaching how science works is not just a bad education, it is also dangerous to a functioning democracy.3 Susan Jacoby has written about the effects an education without science has in our society and also how difficult it is to overcome our ignorance. She found that students and teachers have a misunderstanding how science works and that teachers tend to avoid topics that challenge students' prior beliefs. She believes the purpose of teaching is to "replace ignorance with knowledge—a process that generally does involve a fair amount of argument."4 This is pretty much in line with what John Dewey said in 1909, "teaching must not only transform natural tendencies into trained habits of thought, but must also fortify the mind against irrational tendencies current in the social environment, and help displace erroneous habits already produced."5

An education that appeals to intuition disregards that our minds are predisposed to cognitive errors and does not align with how challenging it is to obtain knowledge from the world. John Dewey wrote that education is not only "to safeguard an individual against the besetting erroneous tendencies of his own mind—its rashness, presumption, and preference of what chimes with self-interest to objective evidence—but also to undermine and destroy the accumulated and self-perpetuating prejudices of long ages."5 According to Pinker other sources of errors include "faith, revelation, dogma, authority, charisma, conventional wisdom, the invigorating glow of subjective certainty," in order to pursue knowledge he suggests "we must cultivate work-arounds for our cognitive limitations, including skepticism, open debate, formal precision, and empirical tests, often requiring feats of ingenuity."6 Science is not only more accurate than our intuition in knowledge acquisition, it also does a better job at teaching us how the brain gives rise to the mind.

We can't directly observe our thought process which makes it difficult to understand how our brains function. Daniel Dennett wrote, "we don’t see, or hear, or feel, the complicated neural machinery churning away in our brains but have to settle for an interpreted, digested version, a user-illusion that is so familiar to us that we take it not just for reality but also for the most indubitable and intimately known reality of all. [...] Our access to our own thinking, and especially to the causation and dynamics of its subpersonal parts, is really no better than our access to our digestive processes..."7 Since we can't directly observe our thought process, or that of others for that matter, we must rely on other means to infer what happens in the brain. The brain is an information processing organ with no direct access to the external reality and we don't have direct access to its processes. The brain creates what Daniel Dennett calls the user-illusion, which is similar to the illusion created by handling desktop items and the computer hardware; we are ignorant of the computer's hardware processes while managing the user's interface. Similar to how we can download software into electronic devices, the brain acquires "software" for the mind by processing information from the environment, Dennett states. 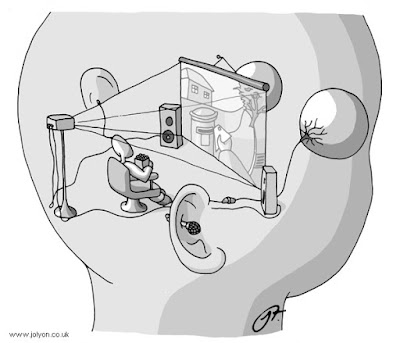 These thought processes have been called mental representations and computations and they can be studied scientifically without having to "ignore the evidence of our own eyes and claim that human beings are bundled of conditioned associations, puppets of the genes, or followers of brutish instincts" Steven Pinker wrote.8 Although mental representations are not directly observable, it is important not to attribute them to a Cartesian theater in the brain (pictured above) or as some indescribable thing that floats above our heads in the ether. Some scientists might claim that science has no business in theorizing about what is not directly observable, but scientific realists think otherwise.9 Another important feature of mental representations is that they are not definitions, Pinker writes,

This is an important distinction because memorization of definitions can easily be confused with mental representations. If we are interested in having accurate mental representations learning how our minds work and how it applies to our everyday lives is an important component in decision making. Another important distinction is that between intuition, judgment, and decision making. We all develop expert intuition with enough exposure and frequent feedback in various aspects of our lives according to Daniel Kahneman. He also wrote that 'the accurate intuitions of experts" under uncertainty "are better explained by the effects of prolonged practice than by heuristics."10 Most often times it is thought that intuition dictates the whole process of decision making in medicine, but this, in my opinion, is wrong. This fails to take into account the importance of adding and subtracting diseases in the differential diagnosis; an effortful process that treats diseases more like hypotheses to be tested rather than commandments set in stone. This notion also neglects the process of decreasing contextual uncertainties in the communication process between all parties involved in the decision-making process. Another important feature not taken into account is the uncertainty that exists in medical/scientific knowledge or the fact that diagnostic tests are not perfect and medical treatments are not 100% effective. If exposure and frequent feedback are important for intuition development then, I would expect differences in expert intuition to vary as disease prevalence varies across different regions and time. This renders intuition as a dynamic entity and not as a static trait in people. Therefore, performance, especially based on intuition alone, cannot explain expertise in clinical decision making.

Although expert intuition is more accurate than that of the non-expert, expert intuition is not 100% accurate. Daniel Kahneman reminds us that expert intuition "strikes us as magical, but it is not. [...] The psychology of accurate intuition involves no magic. [...] You can feel [Herbert] Simon’s impatience with the mythologizing of expert intuition when he writes: “The situation has provided a cue; this cue has given the expert access to information stored in memory, and the information provides the answer. Intuition is nothing more and nothing less than recognition." [...] Simon's point is that the miracles of expert intuition have the same character"10 as those when a child recognizes familiar animals. This aligns well with Dennett's views, intuition according to him "is simply knowing something without knowing how you got there" and adds, "It's not hard to program intuition into a computer. You simply write a computer program that solves any problem at all and when you ask it how did it get the answer it says I don't know it just came to me."11 It is difficult to accept intuition alone as the justification for getting expertise training.

Using the allegory of the cave by Plato, Steven Pinker writes that mental representations are the shadows and the skull is our cave.8 Some tips to improve our way of thinking have been talked about above, but a good education should emphasize what implications the scientific method and Charles Darwin's findings have on our understanding of ourselves and the world. Steven Pinker writes that traditional education "is based in large part on the Blank Slate: children come to school empty and have knowledge deposited in them, to be reproduced later on tests", later on, he adds that education "is neither writing on a blank slate nor allowing the child's nobility to come into flower [a progressive view of education]. Rather, education is a technology that tries to make up for what the human mind is innately bad at."12 Here are a few subjects we are innately quite bad at revising our prior beliefs, scientific reasoning, statistics, decision making, probability, and dealing with uncertainty. These subjects can help us with our cognitive limitations and improve our decision-making accuracy. A good education should help us to become critical thinkers and be able to learn independently from primary sources without depending on others to interpret the evidence. It should teach us how to evaluate the evidence from all different kinds of sources, even when it's from experts or other authorities in our domain of expertise. If knowledge retention is important Pinker writes that "people retain more when they are called on to think about what they are learning than when they are asked to pluck fact after fact out of lectures and file them away in memory."1 How then can education help us step out of the cave and get a more accurate picture of reality? Pinker adds that an "education is likely to succeed not by trying to implant abstract statements in empty minds but by taking the mental models that are our standard equipment, applying them to new subjects in selective analogies, and assembling them into new and more sophisticated combinations. The view from language shows us the cave we inhabit, and also the best way out of it."