Say what you mean, mean what you say

The significance language has over our beliefs and actions is noteworthy. It is one of our most sophisticated and yet imperfect evolutionary tools of communication. Language helps our brains with transmitting and receiving information not only between cultures, but also over different periods time. Although language can affect our thoughts cognitive scientist Steven Pinker states that "language is not: written language, proper grammar, [or] thought."1 This is in agreement with Daniel Dennett's statement that memory as "a storehouse of things written is... a bad metaphor."2 Our memories instead are collections of meaning or gists of which sentences can barely describe.1 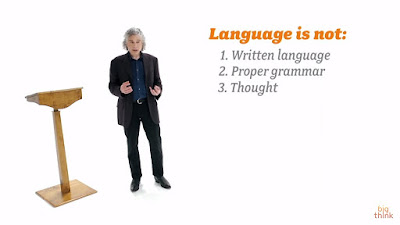 Language has various components that not only affect our thoughts, but also help us with describing the world external to us. This connection is what Steven Pinker calls the language interface.1 Although it is a great tool, it doesn't take much to discover its imperfections when describing the external world and our thinking. For example, it is common to encounter phrases such as "think about", "consider", "be suspicious of", "most likely", "keep in mind" "probably", "unlikely", "very likely" "possibly" etc. In these instances language is being used appropriately, but these phrases are used to construct stories devoid of evidence giving a false sense of certainty. In his story Through the looking glass,3 Lewis Carroll reminds us how treacherous language use can be,

‘And only one for birthday presents, you know. There’s glory for you!’

Humpty Dumpty smiled contemptuously. ‘Of course you don’t—till I tell you. I meant “there’s a nice knock-down argument for you!”’

‘When I use a word,’ Humpty Dumpty said in rather a scornful tone, ‘it means just what I choose it to mean—neither more nor less.’

‘The question is,’ said Alice, ‘whether you can make words mean so many different things.’

‘The question is,’ said Humpty Dumpty, ‘which is to be master—that’s all.’

According to Philip Tetlock, an expert in judgment and decision making, a nongranular-vague language renders information "unstestable" and "almost useless" while giving a false sense of security.4 It is difficult for our minds to compute information and consider conflicting evidence under uncertainty, so we construct stories and make decisions from conclusions and beliefs rather than start from valid arguments.5 It would be no surprise then that a vague language does not help with calibration and may even lead to overconfidence.

One of the most difficult and important concept to master in decision making is how probability interpretation helps with measuring and reducing uncertainty. Understanding and applying probability improves the precision of our language and helps with our metacognition, but it takes deliberate practice.4 Probability interpretation has been useful not only for scientists, but for many other professions including the intelligence community. Unfortunately, a vague verbiage does not help, creates confusion, and is counterproductive. The following figure from a small sample study shows how different people interpreted similar phrases, 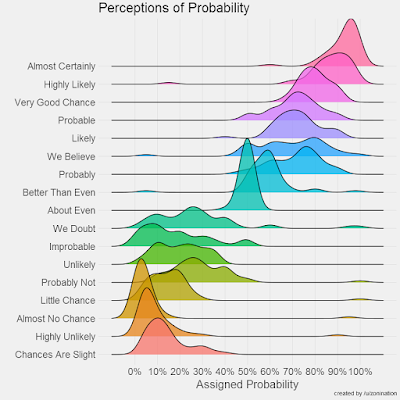 Using a more precise language may also help with the revision of prior knowledge and beliefs. I believe there's a false dichotomy when trying to distinguish scientific knowledge from medical knowledge. Medical knowledge is as fallible and testable as scientific knowledge is when approached in a rational manner. Djulbegovic et al. state that an "essential distinction from religion is that scientific and medical knowledge is admittedly fallible."6 The fallibility of knowledge should then be taken into serious consideration regardless who, what group, what form of print/verbal, or under what hashtag is transmitted from. Adopting a dogmatic language and not changing our minds and actions in accordance to the best available evidence should be paralleled to a time when people believed the Sun revolved around Earth and critical thinkers were considered heretics.

In a 1973 lecture Imre Lakatos stated that "Blind commitment to a theory is not an intellectual virtue: it is an intellectual crime."7 Accepting knowledge as infallible or never changing are teachings of religions, dogmatism, and cults. We should, instead, adopt David Hume's axiom who stated that a wise person "proportions his belief to the evidence."8 It is reasonable then to use our language not as it is used in religions and cults, but to use it in a way that enables us to revise our beliefs, actions, and knowledge according to the evidence at hand. A scientific attitude provides an objective language that helps us evaluate our experiences and evidence as best we can. Although, not a perfect tool it is the best we have invented to understand how the world and our minds work. Keeping up with the scientific literature is a lot of work, but not updating our beliefs and actions in accordance to the best available evidence may create more harm than good.

Science has been around long enough that we should have learned how to use its critical method more effectively, but according to Daniel Kahneman "what is disappearing, or seems to be disappearing, is a culture of debates between diverse opinions."5 In learning critical thinking and de-biasing, he adds "An observer with less stake in the thinking and less involved in the process of generating the mistake may be more likely to discover it. So developing critical thinking, not in the sense of criticizing yourself, but in the sense of criticizing other people, real criticism, may be a good way to go."5 We all have erroneous beliefs and biases, but most of the time we do not know which ones they are. As Richard Feynman said "It is impossible to find an answer which someday will not be found to be wrong."9 The most effective method of correcting our beliefs, actions, and knowledge about how nature works is learning how science works. If we don't learn how science works, we can't learn which scientific research practices are impairing us from correcting our beliefs.