Inside the storehouse of memories

Jeffrey Karpicke, PhD, a cognitivist scientist at Purdue wrote an article about the significance of retrieval practice in learning and memory. The article starts,

The movie "Inside Out" (2015) takes us inside the mind of its young protagonist, an 11-year-old girl named Riley, and depicts memory in a way that is sure to resonate with many people. In Riley's mind, her memories are objects — globes colored with emotions — that are stored in a mental space, just as physical objects are stored in a physical space. When Riley experiences an event and creates a new memory, a new globe is produced in her mind, rolling down a ramp like a ball returning in a bowling alley. When Riley re-experiences a past event, a globe is placed in a projector and events are replayed, projected on a screen in her mind. Cognitive psychologists refer to the mental processes involved in the creation of new memories and the recovery of past memories as encoding and retrieval, respectively.

The depiction of the mind in "Inside Out" follows centuries of thought on how mind and memory work. Throughout history, scholars have used a common metaphor to talk about memory: The mind is a vast storehouse or space; memories are objects stored in that space; and retrieving a memory is akin to searching for and finding an object in a physical space (Roediger, 1980). To learn something new, according to this view, the challenge lies in getting knowledge "in" one's mental space. Getting it back "out" when needed is important, too, but learning is usually identified with the encoding of new knowledge in memory. Retrieval is assumed to be neutral for learning; retrieval is needed to assess what a person has learned, but retrieval processes themselves are not thought to produce learning.

The article continues to explain the importance of retrieval practice and presents scientific support for what Karpicke calls retrieval-based learning. I would like to focus on how the movie Inside Out depicts how the brain works, here is the official trailer,

The movie depicts an intuitive perspective of how we think our brain works. It is also what Daniel Dennett calls Cartesian Materialism. Susan Blackmore states,

In Consciousness Explained, Dan Dennett argues that although nearly everyone rejects Cartesian dualism, with its separate physical and mental stuffs, most people still think of consciousness as though there is a place or process in the brain where everything comes together and consciousness happens; as though there is a finish line past which things become conscious and are displayed on the stage or screen to be appreciated by the inner audience of one. He calls this tempting, but false, way of thinking about consciousness Cartesian materialism, and discusses the give-away signs of being a Cartesian materialist. 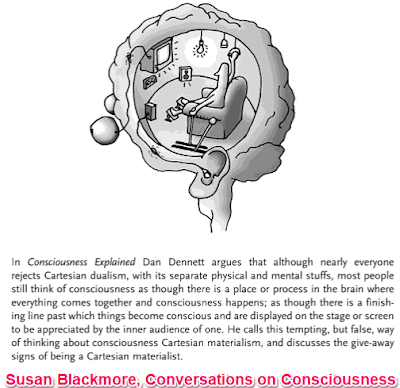 Jennifer Talarico, associate professor of psychology at Lafayette College, wrote the following about the movie Inside Out for The Conversation. Part of her analysis states,

The film shows memories as stable and complete representations of actual events – something we know is not the case. The events of Riley’s day are automatically “encoded” into a single globe. Each memory globe is “stored” somewhere on a shelf in a vast long-term storage library. Memories are “retrieved” and sent intact and exact, back to Headquarters and, therefore, to consciousness.

That might be a handy visual metaphor for memory, but it’s not actually how memory works. We do encode events from our daily life without a deliberate intention to learn or remember them. For instance, you remember what you had for breakfast today even though you did not have to try to remember that information. But, our brain doesn’t store each memory as an individual whole unit.

The movie tries to capture our ability to identify overarching themes and causal chains among our memories by showing how “core memories” fuel aspects of Riley’s personality, but this serves to emphasize individual memories rather than constellations of interrelated memories. Although we may have specific self-defining memories, these are typically quintessential examples of larger patterns in our lives. Our memory is less like the public library with many books on the shelves and more like Wikipedia with its many linked pages of information.

This movie's characterization of how the brain works is an example of a just-so story, not difficult to find playing the role explanations. The problem is that they are bad explanations. Daniel Dennett said the following about the metaphor of memory as a storehouse,

The idea that memory is a storehouse of things written is already a metaphor, and even a bad metaphor. The very idea that there has to be a language of thought doesn't make sense unless you think of it as a written language of thought. A spoken language of thought won't get you much of anything. One of the themes that interests me is the idea of talking before you know you're talking, before you know what talking is, which we all do. Children do it. There's a big difference between talking and self-conscious talking, which, if you get clear about it, helps with the theory of language.

I think it's important to scrutinize explanations, models, theories, etc. to make sure we do not believe and work under fairytales.