[R]ationality does not guarantee that every single decision would be error-free; on the contrary, rational decision-making takes into account the consequences of possible errors—false negatives and false positives—to aid in arriving at desirable outcomes. Rationality is often defined as acting in a way that helps us achieve our goals,[5, 8] which in clinical setting typically means desire to improve our health. Most major theories of choice agree that our goals are best achieved if we take into account both benefits (gains) and harms (losses) of alternative courses of actions, which in medical context (as in everyday life) often occur under conditions of uncertainty (principles 1 and 2, Table 1).

The history of decision theory is extensive and it has always been cognizant of the relationship between outcome and process. Two of the most commonly debated theories, and which I am more familiar with, are bounded rationality, developed by Herbert Simon and advanced by Gerd Gigerenzer, and dual process theory, supported by Daniel Kahneman. Although not extensively debated as the previous two, another important model included in the article is the threshold model which was suggested for clinical decision making by Pauker and Kassirer in the NEJM in 1980. Djulbegovic and Elqayam considered more theories of rationality, but I'd like to copy the description of these in this post.

Bounded rationality[15, 16]: a descriptive theory, which posits that reflective of principle that rationality should respect epistemological, environmental and computational constraints of human brains, rational behaviour relies on satisficingprocess (finding a good enough solution) instead of EUT maximizing approach. The heuristic approach to decision-making is the mechanism of implementation of bounded rationality.[17] Often linked to prescriptive models of rationality[18] designs for improvement of human rationality informed by cognitive architecture.

Dual processing theories of rational thought (DPTRT)[5]: a family of theories based on the architecture of human cognition, contrasting intuitive (type 1) processes with effortful (type 2) processes. A descriptive variant of this approach is that the rational action should be coherent with formal principles of rationality as well as human intuitions about good decisions. The normative/prescriptive variant of this theory is sometimes referred to as “meliorism,”[5, 12] the position that humans are often irrational but can be educated to be rational. According to Meliorist principles, when the goals of the genes clash with the goals of the individual (see below), the rational course of action should be dictated by the latter.

Example: physicians often adjust their recommendations based on their intuition.[20]

Threshold model of rational action proposes that the most rational decision is to prescribe treatment or order a diagnostic test when the expected treatment benefit outweighs its expected harms at given probability of disease or clinical outcome.[41] It has been formulated both within EUT,[42, 43] dual processing theories[44] and regret framework.[37, 38, 41, 45]

In table 1, the authors list the core ingredients they considered most commonly relevant to clinical decision making; they include uncertainty, cognition, harms, benefits, context, ethics, and morality. As the authors explain, the main purpose of their study was not to assess each theory but to ascertain how rationality and these features would fulfill a practical role clinical decision making. 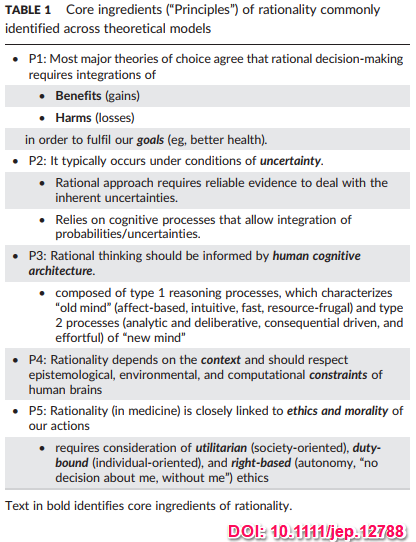 The last section of the main paper gives a great summary.

We do not propose a single normative model to replace EUT; instead, we posit that unified, one‐size‐fits‐all theory of rationality may not, in fact, be possible. Fundamentally, we argue that what is “rational” behaviour under one rationality theory may be irrational under the other theory. The choice of theory under which we operate is important as it determines both policy and our individual decision‐making. In fact, we contend, we should pragmatically adopt definition of rationality to the problem at hand. Because such adoption is context‐sensitive, it is not possible to recommend any specific model. Instead, we propose that the core principles in Table 1 can potentially provide guidelines toward selecting normatively and cognitively informed prescriptive models applicable to each context. Thus, we propose that pragmatically rational medical decision‐making crucially depends on integration of the evidence related to the problem at hand (“Is”) with the goals and values to decisions and actions (“Ought”),19 while taking context into account. Hence, rational medical action should respect underlying evidence and be coherent with [a tractable form of] formal principles of rationality as well as human emotions and intuitions about good decisions and ethical principles taking the utility of society and the individual into account. The rejection of a unified theory of rational medical decision‐making and highlighting the need to match rationality model to specific medical circumstances has not been attempted before.

In the end, “practical wisdom may be the hallmark of rationality,”31,32 often in medicine captured in terms of saying: “A good doctor knows how to treat/order a diagnostic test, a better one knows when to treat/order a test, but best one knows when not to do it….” The characteristics of such decision‐making, among other things are ability to distinguish between reducible and irreducible uncertainty and knowing how to handle false‐positive and false‐negative errors in explicit and transparent ways, to specify what values are placed on these errors, and to understand the potential for unavoidable injustice, because the consequences of actions may affect different individuals in different ways.71 We conclude that no “one size” rationality model fits all clinical circumstances and decision makers. Empirical research is needed to identify the situations which can be best matched to given rationality strategy.

How important is having a theory that works?

Competence is the ability to carry out an act, but comprehension implies that the organism (or robot) carrying out the act has intent and an understanding of what it is doing. As I like to say, you may have a theory about your dog, but your dog doesn't have any kind of theory about you.