Probability and the uncertain nature of clinical information

Science/Medicine uses the the concept of probability to measure and communicate uncertainty. Probability has different conceptualizations, and it is important to learn them when interpreting and/or applying scientific information. The Stanford Encyclopedia of Philosophy states:

Probability is virtually ubiquitous. It plays a role in almost all the sciences. It underpins much of the social sciences — witness the prevalent use of statistical testing, confidence intervals, regression methods, and so on. It finds its way, moreover, into much of philosophy. In epistemology, the philosophy of mind, and cognitive science, we see states of opinion being modeled by subjective probability functions, and learning being modeled by the updating of such functions. Since probability theory is central to decision theory and game theory, it has ramifications for ethics and political philosophy. It figures prominently in such staples of metaphysics as causation and laws of nature. It appears again in the philosophy of science in the analysis of confirmation of theories, scientific explanation, and in the philosophy of specific scientific theories, such as quantum mechanics, statistical mechanics, and genetics. It can even take center stage in the philosophy of logic, the philosophy of language, and the philosophy of religion. Thus, problems in the foundations of probability bear at least indirectly, and sometimes directly, upon central scientific, social scientific, and philosophical concerns. The interpretation of probability is one of the most important such foundational problems.

In their book Medical Decision Making Sox, Higgins, and Owens write about probability and how it may be used in medical decision making:The definition of probability referred to a “present state” or a “future event” because uncertainty in medicine can be about the present state of the patient or about the occurrence of a future event. Furthermore,

Representing our uncertainty about the patient as a probability is an essential step in learning how to make decisions without certain knowledge.

The uncertain nature of clinical information

Imagine a clinical finding that occurred in a disease in the following way:

We would not require clinical judgment to diagnose the disease; it would be sufficient to know if this finding were present. This clinical finding is fictional, an illusion. No clinical finding has this perfect, one-to-one correspondence with a disease. Therefore, clinicians are seldom, if ever, certain what a finding implies about the patient's true state. They must recognize the following bleak truth:

The true state of the patient lies locked within the body, inaccessible to direct observation. The clinician must use external, imperfect cues to infer the patient's true state.

But even a qualitative language of probability can be quite vague in itself, Sox et al. expand:

Clinicians' language reflects their understanding of uncertainty. In talking about a difficult decision, the clinician may say that she is treating the patient for a disease that is “possibly present” rather than a disease that is “probably not present.” Most clinicians use such words to describe gradations of belief in a hypothesis. However, these words may interfere with clearly expressing uncertainty, for the following reasons:

Clinicians who use words to communicate their uncertainty may feel secure that they have conveyed their meaning. In fact, words are the enemy of clarity in expressing uncertainty. When words are mapped onto a probability scale, the ranges of probabilities that correspond to different words overlap so much that the words do not have unique meanings. Probability, a quantitative means for expressing uncertainty, avoids this ambiguity. 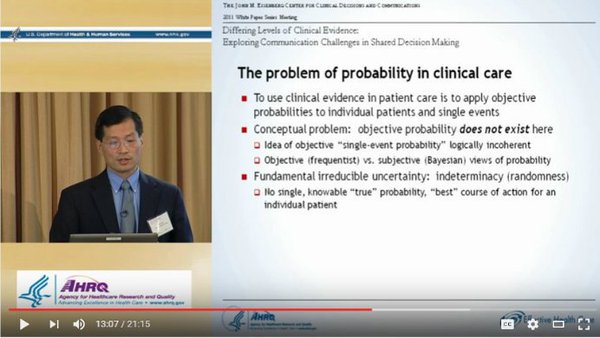 Sox, et al, expand on the subjective and objective interpretation of probability:

Furthermore, Weisberg reminds us that clinicians and researchers inhabit different conceptual worlds when it comes to probability and uncertainty. Another relevant interpretation of probability is one offered by John Stuart Mill:

We must remember that the probability of an event is not a quality of the event itself, but a mere name for the degree of ground which we, or some one else, have for expecting it. The probability of an event to one person is a different thing from the probability of the same event to another, or to the same person after he has acquired additional evidence. The probability to me, that an individual of whom I know nothing but his name will die within the year, is totally altered by my being told the next minute that he is in the last stage of a consumption. Yet this makes no difference in the event itself, nor in any of the causes on which it depends. Every event is in itself certain, not probable; if we knew all, we should either know positively that it will happen, or positively that it will not. But its probability to us means the degree of expectation of its occurrence, which we are warranted in entertaining by our present evidence.

Sox, et al., add a word of caution on the subjective interpretation of probability:

Personal experience is the principal influence on a clinician's probability estimates. Experienced clinicians have seen so many patients that they have a good intuitive understanding of events that occur commonly and events that are unusual. Even in the hands of experts, however, these subjective estimates are prone to systematic error...

Probability is an important concept in science and practice because it aids in dealing with uncertainty. It is also important to acknowledge that probability has different interpretations, applications, and potential for errors.