In his 1997 article David Sackett on his description of evidence-based medicine states:

The practice of evidence-based medicine is a process of life-long, self-directed learning in which caring for one's own patients creates the need for clinically important information about diagnosis, prognosis, therapy, and other clinical and health care issues, and in which its practitioners: 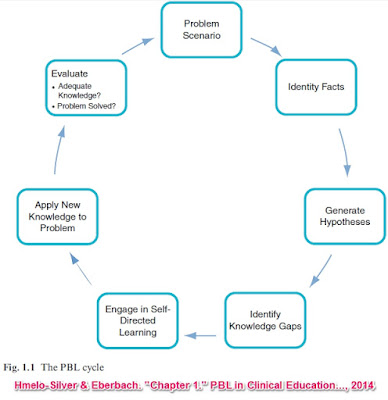 The introductory chapter is comprehensive, but here I will only list a few points I consider important features of problem-based learning as described by Hmelo-Silver and Eberbach:

Howard Barrows had a great insight about activities that do not promote learners to become independent and this is one of them:

Case histories and case vignettes containing succinct and complete databases are used extensively in the teaching and evaluation of medical students. The clinicians who wrote these cases had to generate appropriate initial hypotheses about the patient’s problem, as it initially presented, and carry out an appropriate inquiry to assemble the significant and relevant data for the case write-up. As a result, this important and often difficult aspect of reasoning has already been performed for the student. For undergraduate students who must learn to inquire logically in an effective and efficient manner, this use of case vignettes or complete cases may be worse than spoon-feeding. A teacher at the Harvard Business School, where the ‘case method’ has flourished over the last half century, identified the same problem with their use of cases. He expressed the concern that when their students entered the real business world after graduation no one would give them a case when they were confronted by a problem and they would not know how to obtain the data they needed to build their own case.

The practice of evidence-based medicine, as originally described by David Sackett, entails the same set of skills as those found in problem-based learning. The goal of these skills in the right environment is the development of an independent and adaptable learner.